Over the years, Toronto-based Sigmund Soudack & Associates Inc. has created the structural design of any number of high rise buildings. But designing the structure for a 56-storey elliptical tower at the Absolute City Centre development presented a unique set of challenges. For starters, the firm says, every floorplate in the signature building is different. Then there were inherent problems posed by concrete floor slabs extending from the interior to form balconies that wrap around the building. “They came up with a very simple, magical, ingenious solution that enabled us to treat the twisting tower like a regular building,” recalls Attila Burka of Toronto-based Burka Architects Inc.

Burka was the architect of record for the tower responsible for fleshing out a competition-winning proposal by Yansong Ma of Beijing-based MAD Architecture Studio and creating detailed working drawings for the builder. The concrete, steel and glass skyscraper, known colloquially as the Marilyn Monroe tower, was recently topped off by Fernbrook Homes and Cityzen Development Group.

A 50-storey companion is scheduled to be topped off next spring.

“This is a unique occasion for us, for Mississauga and for the entire Greater Toronto Area,” said Danny Salvatore, president of Fern brook Homes. “Working together, we defied the sceptics and then delivered a structure that many said just could not be built because of its innovative form.”

Soudack, who founded his firm in 1968 and has overseen the design of more than 400 highrise buildings, was invited to join the building team by Fern brook’s project manager because, he says, “they wanted someone with a practical sense.” He also welcomed the project for the positive effect it would have on his personnel, stimulating the creative juices.

“Structurally, every floor plate is different,” says Yury Gelman, senior structural engineer on Soudack’s team. “Whenever we design usual buildings, we have so called typical floors.

“But this wasn’t the case here. And the walls are different, too. When the ellipse turns, the walls have to get longer or shorter, or else they’d stick out.”

Soudack’s design team had to solve the problem of balconies wrapping continuously around the building acting as heat sinks.
“This is what makes the shape attractive,” Soudack says.

However, the constant rotation of floors complicated the engineering. Normally, columns rise above columns in a straight vertical line and they are only subject to the force of gravity. Shifting columns, however, add another kind of load called shear, a deformation that makes the columns want to bend like a bow as in bow-and-arrow.

“We had to calculate all these combinations and permutations to arrive at the maximum load on every element,” Soudack says. “This was difficult to keep track of. Thank God for computers!”

And what of that “simple, ingenious and magical” engineering solution? 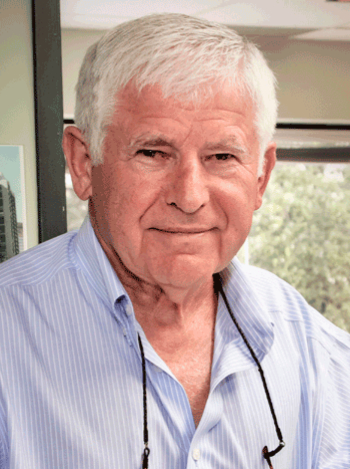 Soudack & Associates says the inherent problem with a concrete floor slab extending from the interior to form the balcony, as it does here, is that it acts like a heat-sink or fin that absorbs the outside heat or cold.

It transmits this temperature drop to the interior, along with attendant condensation problems. A balcony that wraps the building continuously exacerbates the problem.

As Soudack recalls, “We created a new kind of thermal break that, to the best of our knowledge, hasn’t been used before.”

His team devised a balcony that appears to wrap the exterior wall continuously. Actually, it meets the wall in two-foot segments alternating with four-foot gaps. The cold or heat only travels through the two-foot segments, which affects the interior temperature minimally.

“We could have specified a proprietary, German-made stainless-steel thermal isolation joint that’s very expensive,” Soudack says.
“But I figured we could come up with a low-tech solution that works almost as well at a much lower cost. You can always throw money at a problem, but that’s not good engineering.”

The tower is being erected with the use of flying forms, a system for high-rise concrete construction that Soudack helped develop.
It uses large, truss-mounted assemblies that a crane hoists upward from floor to floor.
Residents are scheduled to start moving into the Marilyn Monroe tower next March.